Recently I took my camera out into the garden so that I could spend some time reviewing how things stand before the Spring planting and growing season starts in earnest.

They say that up here you shouldn't plant anything out until after Melbourne Cup Day (first Tuesday in November) because frost free nights are not guaranteed prior to that date. Tish!  I can't wait that long. We have a short enough growing season as it is.  But I will likely wait until mid October for the most vulnerable of my sowing items.

My garden has been prepared for its second season for a few weeks now.  So, how are things going?  Here is a bit of a review.

I have noticed that there are a greater number of birds visiting my garden this year.  Two pairs of Kookaburra spend some of their daily hunting time here now whereas I only really got to hear them in the area previously.  Of course there are the ubiquitous magpies and also a pair of what I think may be wattle birds.  I have also noticed a pair of Corrawong.  My favourites are the friendly and cheeky Rosellas, a few of which will actually take food out of my hand.  All of the birds, even the similarly sized Corrawong, are intimidated by the Magpies, and they all of course scatter noisily when the Wedge-tailed Eagles fly over the gully.  My garden is now teeming with life at ground level, and the birds love it.  I too love them all for the good work that they do in maintaining nature's balance and for the little packages of garden beneficial nutrients they leave behind during each visit. 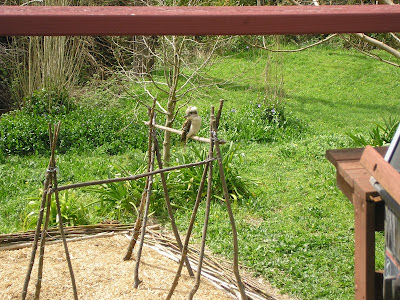 One of my successful crops last year were the spinach and kale varieties.  They have continued  to provide me with the basis of some meals even over the winter and are one of only a few things that remain from that time.  They are continuing to produce abundant new growth now.
I almost trod on these little beauties sitting in the middle of my walkway between beds.  Baby Kale plants which have self-seeded from last year's stock.  They will get moved to a safer place soon. 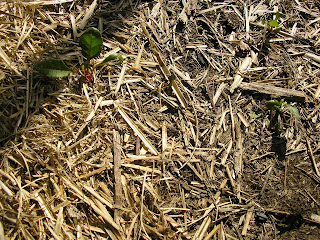 I did plant a couple of things over winter.  Here are some onions that have popped up recently... 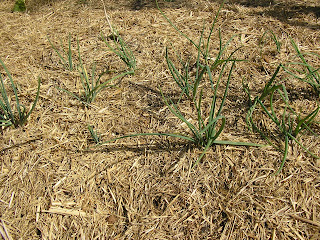 ...and here is my new strawberry patch.  Eleven new plants sown from bare root stock to supplement the five plants from last year towards the other end of the garden. 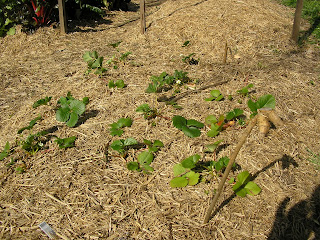 I am not sure what happened to the garlic I planted but I did get it in very late.  Maybe there is still time for it to appear.
I am very pleased with how most of the herbs in my spiral planting have survived winter frosts and are now flourishing.  A few did not survive but at least I now know which ones require a little special care and replacements perhaps should be planted in a better sheltered area. 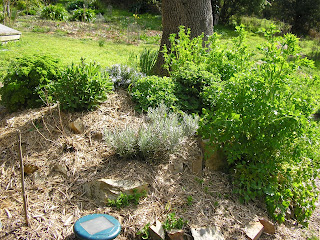 I planted these potato bags over winter because some eating stock had been left too long in the cupboard and had begun to sprout.  Another experiment which appears to have gone well, so far.  The bucket contains worm pee from my worm farm.  I expect the plants will love some of that. 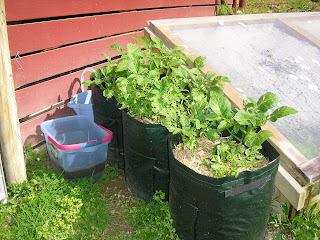 My fruit trees are now in leaf and a few have actually blossomed, including this Nashi pear. 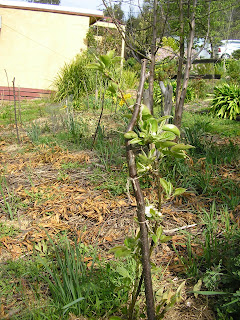 My Hugelkultur, built (if I remember right) just before winter, is really asking me for things to be put into it.  I did plant some extra potatoes there and they popped up a few times but each time the frost cut them off.  A couple are now showing again, so here's hoping.  There is also a celery and perpetual spinach that were recently planted.
I did put a few Yacon rhizome cut-offs in there but they are not showing, yet, he says hopefully.  I separated my Yacon rhizome into about ten cuttings, each of which looked, to me, as though they might make it on their own.  We will have to wait and see.  They are planted in various parts of the garden.
I am nothing if not an experimenter and new idea follower. 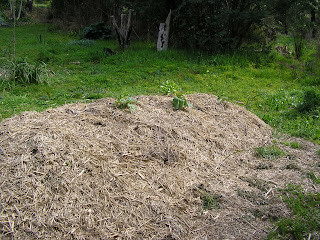 This sorry looking thing in the cage is an almond tree.  It had a lovely set of leaves when I planted it, but the next day it had none.  Those wascally wabbits, or maybe the kangaroos.  I bought a roll of 60cm wire last year but found no reason to use it except to cover the sweet potato.  Perhaps the local wildlife were giving me a honeymoon period.  It is different this year and this almond defoliage event was when I started caging things.  Not everything.  Most of my fruit trees are untouched but this almond and especially the blueberries came in for some unwanted attention. 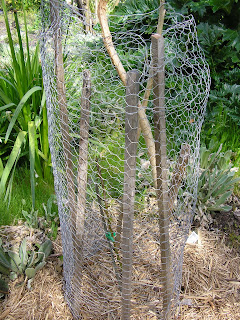 This is a Wintersweet, which I decided not to take chances with.  It was caged immediately on planting.  Wish I could remember why I bought it now.  Must have had a good reason at the time.  It is supposed to fruit.  Maybe it was just another experiment. 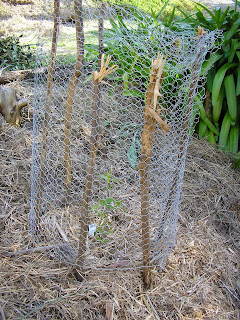 I am growing to love doing this stuff.  Last year I was almost afraid to start working on what was pretty much a blank canvas.  Now I am eager to get stuck into a new growing season with a little bit more confidence than at this time last year.  Successes and failures; successes and failures.  Hopefully a few more successes than failures.  Need to get the failures out of the way before they could become life-threatening and to get the successes bedded in before the need for life-sustaining practices becomes critical.

I took the above photo snaps a few days ago.  This afternoon I went out again with my camera and found a few surprises.

This is a Sturmer Pippin apple with some unexpected blossom.  Ok, I know my plants are currently very small but they have only been in the ground for a short time.  Less than a year, and in some cases only a couple of months.  So, after Winter, it gives me great joy to see them doing something special. 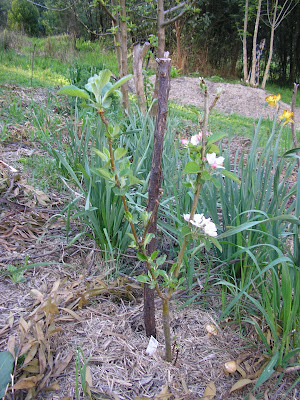 The next three pics show fruit forming on Blueberry, Gooseberry and Blackcurrant bushes. 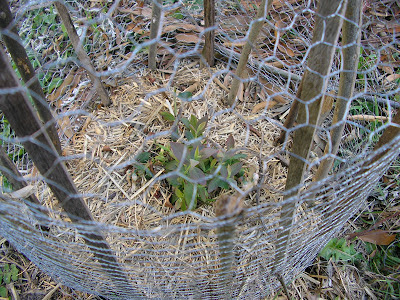 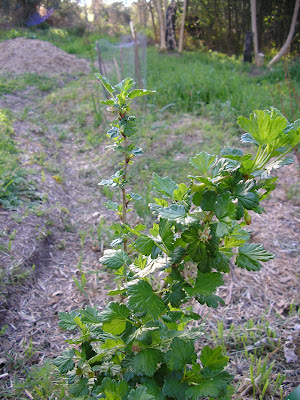 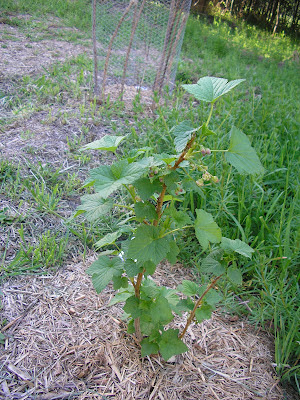 Growing stuff is so rewarding.  Even before you get to eat anything.